Lately, I’ve been super into watching the BBC Edwardian Farm and Tudor Monastery Farm series. I especially like when they read directly from period manuals for instructions for a particular task, then try their hand at it.

As you know, I’ve also just gotten into knitting. I’ve started following folks like Ashley at Woolful, who not only knit beautifully, but are also experimenting with natural dyeing, some using materials from their own land. I added natural dyeing to my sometime-in-the-future bucket list. But then I received Taproot Magazine’s newest issue, Bread, which included an article on dyeing with onion skins that made natural dyeing seem SO DOABLE.

So…I started poking around on the internet, and found a 1935 publication titled Home Dying With Natural Dyes, originally published by the US Department of Agriculture. It asked me to measure by pecks, people!! Seriously, it felt like the stars aligned knowing I could combine my interest in period instructions with natural wool dyeing!!! All that was left to do was to gather the materials I didn’t have (which I learned was just one container of Alum I found at the local grocery for $5.99), and pick my dyeing material. I settled on lichen gathered from our old cherry tree in the center of our property.

Now for the pictures:

*NOTE: For detailed instructions/more info, click on the link for the publication I used above.

Here is what the wool looked like before dyeing (the two knit hats were purchased from a friend, Elle). I bought this particular wool to participate in the Fringe Hatalong, knitting my first ever hat. It’s beautiful as is, but it did beg a little to be dyed. 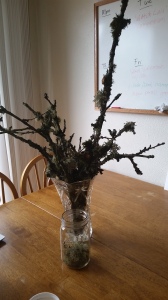 The first step was gathering the lichen. Dan cut small branches and put them in a vase for me. Later he trimmed some large branches so I could collect enough lichen for the recipe. 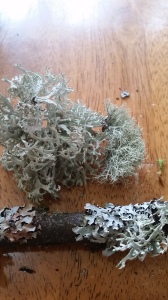 Our tree has these three types of lichen.

Once the lichen was collected, I gathered and created the remaining necessary supplies. Here I’m whittling the bark off my wool dyeing stir stick.

Here I’m getting everything in one place.

Day 1 of dyeing, I measured the ingredients for my mordant – Alum & Cream of Tartar – and prepared the wool for dyeing.

Here I’m putting the rinsed and squeezed wool into the mordant/water mixture. 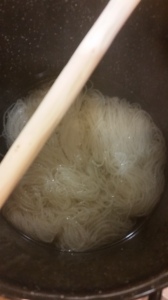 Here’s the wool almost at a boil in the mordant. Once it was done, I turned off the heat and put it outside to sit overnight. 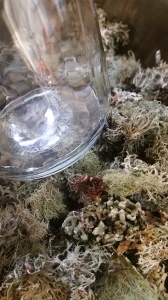 Day 2 of dyeing, I prepared the dye. Here I’m crushing my 1/4 peck of lichen.

Here’s the color of the dye mid-boil.

Then I strained the lichen from the dye. 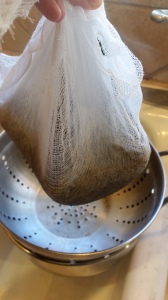 I was careful to get every last drop.

Lastly, I added the mordanted and well-rinsed wool to the dye. Here it is at first drop in.

And here it is near the end of its boil.

All that’s left was a good rinse and towel dry.

Here’s the finished wool in all of its glory sitting in a shady spot to dry. I call her Golden Beauty.

The shady spot? Under the old cherry tree. It just felt right!

I called Dan while the wool was in the dye pot to say that I might just need to do this quarterly. But first, I have a hat to knit!

If you aren’t a knitter, you can dye an old wool sweater or anything cotton too. Let the instructions from 1935 be your guide. There are all kinds of free dyes waiting to be discovered in your yard or hood. Up next for me is dyeing with summer zinnias or dahlias. And on the recommendation of a new friend, maybe some mushrooms in the fall.

Are there any natural dye materials you’d recommend? I’m all ears in the comments!